With so many flashlight brands on the market, choosing the best can be somehow tricky. But If you are looking for the best tactical flashlight, then you should select a Fenix flashlight. The Fenix PD35 Tac is one of the best-selling tactical flashlights on the market. PD35 maximum brightness is 1000 lumens, 5 modes, impact & water-resistant, built with hard-anodized aluminum, and perfect for self-defense or tactical use. In this Fenix pd35 review, we are going to discuss the 1000 lumen Fenix pd35 tactical edition flashlight.

Fenix is among the most reliable flashlight brand on the market. The Fenix pd35 is also one of the brightest 1000 lumen military flashlights and many people love it. This quality made torch has excellent features that make it ideal for outdoor use.

Whether you are a hunter, policeman or hiker, having a quality tactical flashlight is very important. Most of the outdoor activities involve a lot of dangers and being prepared in advance is important for outdoor enthusiasts. Policemen can use a military-grade flashlight to disorient thugs or robbers, while hunters can use the strong bezel that tactical lights come with to hit the target for easy hunting down.

The Fenix pd35 torch has 1000 lumens which makes it be very bright. It uses a CREE XP-L LED which is very powerful and shock resistant at the same time. The LED bulb has a maximum lifespan of 50, 000 hours which is excellent for such a small light. In addition, the tactical flashlight uses 18650 rechargeable Li-ion batteries which have a longer run time. The tail switch is of a tactical nature with a momentary-on function. The nice handle grip ensures that the user has ample time to use the torch. It also has a clip that can be used to hang the flashlight while not in use on the belt, waist, or pocket for ready use. It has both outdoor modes and tactical modes. These include turbo, low, medium, high, eco and strobe mode. These modes can be used according to save on battery power or when attacked in the case of strobe mode.

when selecting a tactical flashlight, it is imp

ortant to choose one that I durably made. Some of the common materials used to create flashlights include plastic, composite, aluminum, and steel. Normally, anodized aluminum is commonly utilized, followed by steel though it is somehow heavier. Pick a torch that meets your needs. The Fenix pd35 is constructed with hard-anodized aluminum. 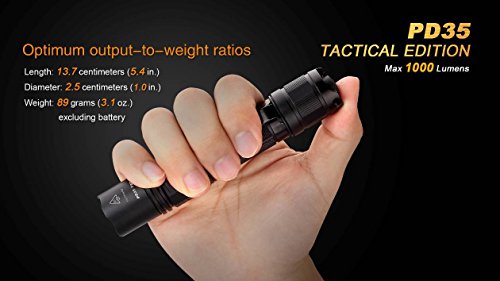 select a torch with an LED bulb. These are more durable and run for long hours. Most of them have a lifespan of at least 50, 000 hours. The Fenix PD35 has a CREE XP-L LED bulb with a filament that is impact resistant. Unlike other bulbs, this is very bright and powerful.

Purpose of the flashlight

when choosing a flashlight, you should know if it meets your purpose or not. A tactical flashlight is great for outdoor activities. It should be well built to match the harsh conditions. Also, it should be impact and water-resistant for durability. In case you want to use a light for illuminating your path, you should choose a military torch with a high number of lumens for greater brightness. The Fenix pd35 is well suited for such tasks.

Most of the reviews about the Fenix pd535 are positive. For instance, Online, it has a good reputation. This is wonderful considering that it has lots of reviews from different buyers. I suggest my two neighbors buy Fenix pd35 flashlight. After a couple of months, I asked about the Fenix pd35 and those statements are as follows:

One of the brightest flashlight I have ever had. I had a Streamlight flashlight. I will say, Fenix features a little bit ahead than Streamlight. The only problem that I faced, In turbo mode, the beam of light does not step down to the high level after a few minutes. Because this flashlight has the heat protection that is built-in. I don’t like that but worth it considering the quality.

I have used lots of junk flashlight and after Kevin’s suggestion, I ordered this light 3 months ago. This is one of the nicest flashlights I’ve ever had. This month I will order two more Fenix pd35. One will use my son’s other for me. Just a few days ago, I broke the lens out of my first one and thus I need to buy another. I am thinking to send this flashlight as a Christmas gift to my relatives.

The Fenix pd35 tactical flashlight is a quality light with exceptional features. I personally love and recommend Fenix flashlight. Thus, I have written this Fenix pd35 review. It is built for outdoor enthusiasts and is considered by many previous users as the brightest with 1000 lumens. It is made of quality hard-anodized aluminum which makes it to be durable and to withstand the harsh conditions of the outdoor surroundings. This Fenix pd35 military flashlight is suitable for hunters, hikers, military, police, and other outdoor enthusiasts. I hope this Fenix pd35 review article has given a clear idea about this flashlight.